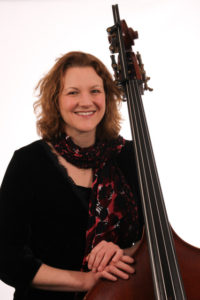 Emily (Rupp) Buccola has delighted in the opportunity to teach students of all ages and backgrounds for over 20 years.  Ms. Buccola holds a Bachelor’s in Music Performance from Bowling Green State University, a Master’s in Music Performance from East Carolina University, and an MBA from Meredith College, where she has also served as Professor of Double Bass since 2010.  Throughout her career, her passion has been performing orchestral and chamber music, but she is a versatile performer and a lover of many styles of music.

While at Bowling Green, she studied with classical double bass with Richard Cioffari and jazz bass with Jeff Halsey.  While in Ohio, she also studied with Corbin Johnston (Utah Symphony) and Scott Haigh (Cleveland Orchestra).  At East Carolina University, she studied classical double bass with Jack Budrow and Leonid Finkelshteyn.  Also while there, she participated in the ECU Jazz program, studying jazz bass with Carroll V. Dashiell.  Beyond graduate study, Ms. Buccola continued her studies with Leonid Finkelshteyn for several years and has sought out orchestral performance coaching from several other accomplished teachers.

Ms. Buccola is a current member of American String Teachers and the International Society of Bassists.  She is also a member of Pi Kappa Lambda National Music Honor Society, and several other academic Honor Societies, including Phi Kappa Phi and Beta Gamma Sigma.  When not performing, teaching, or working in the business world, she enjoys spending time with her family, gardening, reading and writing.

Sign up to receive timely, useful information in your inbox.

Theme by Anders Noren — Up ↑